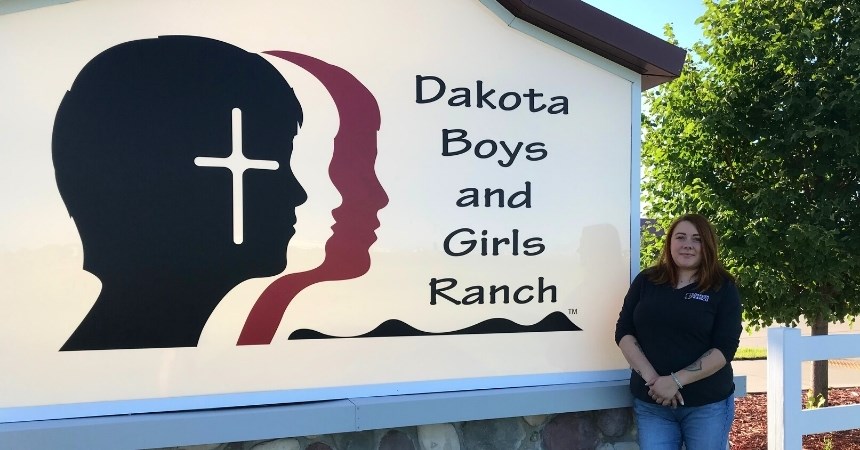 Ariel is at Dakota Boys and Girls Ranch for the second time. Her first time at the Ranch was as a resident, and now she is back as an employee, working with kids who struggle with many of the same challenges as she did.

Her challenges began in middle school when she didn't get along with her parents. Ariel's biological parents divorced when she was 3 or 4, and she lived full-time with her dad and stepmom.

"There was a lot of fighting and yelling. My parents didn't really know how to communicate. And, I wasn't good at communicating," Ariel said.

When the arguing started to negatively affect her younger siblings, Ariel moved in with an aunt and her aunt's longtime boyfriend. From the outside, life didn't appear to change much when she moved—she was only a few blocks away from her parents and she could still walk to school.

But living with her aunt was difficult. Ariel said that while her basic needs were met, she did not do well there. "There was a lot of yelling and a lack of structure. To this day, my aunt does not like to 'keep house,' so friends often told me it looked like a hoarder's home."

About a year into this new arrangement, Ariel's aunt suffered a stroke and a seizure in the same night. After recovering, her aunt had, in Ariel's words, "a new lease on life." After deciding she no longer wanted to live with her longtime boyfriend, she moved out, leaving Ariel in an uncomfortable situation.

"That's when I started running away because I was just really uncomfortable [living with my aunt's ex,]" Ariel said. "I was running away; I was hanging out with kids I wasn't supposed to be hanging out with. At first, I was going to school and being responsible, but then it all started going downhill."

One weekend, after not calling or checking in for two days, Ariel was registered as a runaway. When she returned home, she ended up at the social services office where she waited to see if she would be going back home or into placement. Unsure what to do about her rebellious behavior, Ariel's parents brought unruliness charges against her.

"At the time, I was like, 'What the heck? I'm not that bad of a kid,'" Ariel said. "But it was a good situation because it got me placed at Dakota Boys and Girls Ranch."

Ariel was 14 years old when she arrived at the Ranch, and she immediately felt safe.

"It was really nice to have some consistency...I was really happy to just have a bed that was my own," Ariel said.

From the Ranch's residential treatment center in Fargo, Ariel moved to the Fargo Youth Home where she lived for almost two years. Ariel said the Youth Home was where most of her treatment and healing took place.

"I didn't really have friends before. I had like two. I was not good at making friends in elementary school. It was awful. And my parents didn't figure out anything was wrong until my brother and sister got older and started going to birthday parties and having friends over," she said.

"At the group home, I learned how to interact with my peers in a positive way. A lot of it was figuring out how to express emotions—like regulating yourself and being accountable. And it's definitely how I teach my kids now; [using] 'I feel' statements and making your bed every day, and just kind of being accountable and participating in everyday life."

Ariel's primary worker at the Youth Home was Nicole Bayer, and according to Ariel, Nicole was the most influential person in her treatment.

"She really advocated for me. I could go to her when I was struggling, like with my [dad and stepmom] getting divorced while I was there," Ariel said. "Near the end of my stay, I was being a little sneaky teenager and she really held me accountable. She left a really big impression."

After leaving the Fargo Youth Home, Ariel spent six months in a foster home in Finley, ND, where she finished her senior year and graduated from high school.

Following graduation, Ariel continued to struggle. Like with so many of our kids, it took her a while to incorporate the lessons she learned at the Ranch into her life. At one point, after realizing she was in an abusive relationship, Ariel went to the YWCA in Fargo. From there she moved into her own apartment.

After working in a variety of jobs, Ariel decided she was ready to go to college. She now feels like she has her life on track—pursuing a degree in social work, working at the Ranch, and raising her two daughters in a way that makes her proud.

A job that makes a difference

For Ariel, applying at the Ranch was an easy decision. "The Ranch has always had that place in my heart because I'm still in contact with a lot of people (including Nicole who still works at the Ranch). It just kind of made sense."

And, due to her own experiences as both a resident and an employee, Ariel believes the kids who come to the Ranch have endless amounts of potential.

"They're amazing. They're strong. They're smart. They're way smarter than anybody outside of the Ranch gives them credit for," Ariel said. "They have all the opportunities in the world. If they want to make them happen, they will."

Ariel enjoys seeing kids at the Ranch do well. "My favorite part is just watching them develop and make good choices and get through stuff. [I love] watching the kids grow; even the small victories."

Working at the Ranch is not always easy, but Ariel takes it one day at a time.

"The hard stuff is how hard on ourselves we are when we leave at the end of the day. As staff, sometimes we don't feel like we've given enough. Even though we've given just about everything, blood, sweat, tears, all of it. But then we all come together and give each other pep talks and it's like, 'Okay, we are doing this right.'"

Ariel wants donors to know about our kids, and to know how much their donations are appreciated. "These kids deserve every chance in the world to have a restart at life. There are no words to describe how much we appreciate the donations people make to support our kids."

Ariel isn't sure where she'd be if she hadn't landed at the Ranch, and she isn't sure exactly where she'll end up, but she is sure of one thing: "I envision myself being at the Ranch for a very long time."

This article was originally published in Ranch Voice: Summer 2020.

Read more inspiring stories like this and explore other issues of Ranch Voice.